Quantum entanglement shared between more than two particles is essential to foundational questions in quantum mechanics, and upcoming quantum information technologies. So far, up to 14 two-dimensional qubits have been entangled, and an open question remains if one can also demonstrate entanglement of higher-dimensional discrete properties of more than two particles. A promising route is the use of the photon orbital angular momentum (OAM), which enables implementation of novel quantum information protocols, and the study of fundamentally new quantum states.

Since the first demonstration of photon OAM entanglement by Zeilinger's group in 2001 (Nature 412, 313), never more than two OAM photons had been entangled. Thousand experiments have been done since then, and the two-photon entanglement dimensionality has been increased tremendously (see also our work on spatial entanglement). 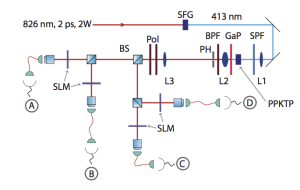 Here we are the first to witness 4-photon OAM entanglement, we use pulsed spontaneous parametric downconversion (SPDC) to produce photon quadruplets that are entangled in their OAM, or transverse-mode degrees of freedom. By quantum state tomography and application of an entanglement witness, we can prove genuine multipartite Dicke-type entanglement. Apart from addressing foundational questions, this could find applications in quantum metrology, imaging, and secret sharing. The figure on the right shows the setup, where we used 4 times computer controlled spatial light modulation to be able to make projective measurements in the transverse-mode space of each photon.

Mehul Malik and others from the Zeilinger's group have succeeded in demonstrating 3-photon OAM entanglement, generated from 2 independent pairs: Arxiv:1509.02561