The spatial phase structure of a photon field can be used as another degree of freedom of the single photon. It can be described using transverse photon modes (i.e., Laguerre-Gaussian, Hermite-Gaussian,…). Photons from parametric down conversion are quantum entangled in in this spatial degree, this gives access to a high-dimensionally entangled Hilbert space. That's very interesting for quantum information and cryptography. 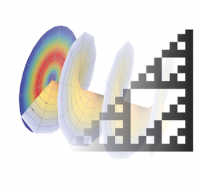 What has the Sierpinski Sieve to do with spatial photon entanglement? A connection arose due to the necessity to discretise the radial-mode space in a practical manner: It is experimentally useful to modulate the detection field phase discretely using only 0 and π. How can we exploit the full amount of quantum entanglement in the radial mode space with this? The Walsh function describes sets of binary orthogonal & complete patterns, which fulfil our requirements. Dependent on how we order these sequences, we find something similar to the high-dimensional Hadamard matrix or the Sierpinski triangle. 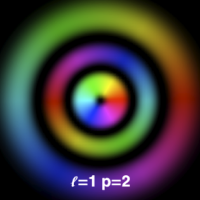 If spatially entangled photons are described in the Laguerre-Gauss basis, most of the time only the azimuthal degree of freedom, which leads to the appearance of orbital angular momentum (OAM), is used. This is because it factorizes, thus independent of radial parameters which makes experiments easy: Symmetry around the optical axis is readily obtained. However, an entanglement resource on equal footing is given by the radial modes. We found that, by careful experiment design, also the radial entanglement is accessible. This promises experiments in highly entangled spaces of the order of 100×100 dimensions. 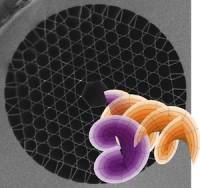 How can such spatially entangled photons be transported practically? Clearly, fiber-based distribution would be very important for application in quantum communication. However, by definition, one needs a multi-mode fiber. It is well known that in conventional multi-mode fibers, uncontrolled coupling of the modes quickly destroys coherent mode superpositions. As a consequence, the quantum information, which is encoded in the spatial degrees of freedom, would suffer from quick decoherence. In this project, we investigate how this can be overcome by using hollow-core photonic crystal fibers in collaboration with T. Euser and P. Russell at the MPI in Erlangen. The picture shows an electron microscopy image of the cross-section of a hollow-core photonic crystal fiber, the sketchy wave fronts indicate a superposition of photons with different orbital angular momentum.

Recently, we were able to demonstration firstly experimentally that fiber transport of spatially (multi-mode) entangled photons is indeed possible! Read more in