Beam shifts happen at optical interfaces and describe deviations from the geometric-optics expected path. They are the consequence of the fact that there is a finite spread in the plane-wave components of realistic optical beams, around the central beam direction. Now, each of these components experiences slightly different Fresnel coefficients during reflection and transmission at optical interfaces; and it turns out that this leads to changes in the beam position and direction: positional (Goos-Hänchen and Imbert-Fedorov type) and angular beam shifts.

For a special issue in the Journal of Optics, Martina Hentschel, Jörg Götte and me wrote a short introduction on this topic:

We once wrote a short essay when the concept of “beam shifts” makes sense and when not. This is in particular important for people who do not do experiments but only numerical simulations, as nonsensical situations occur quickly. Arxiv:1403.2164 (2014). 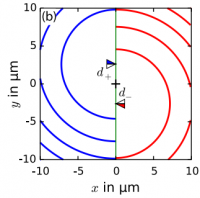 Together with Jörg Götte (MPI Dresden) and Mark Dennis (Bristol) we introduce the concept of “beam eigenpolarizations” for optical reflection. We show how careful control of the incident polarization of a light beam close to the Brewster angle gives a giant transverse spatial shift on reflection. This resolves the long-standing puzzle of why such beam shifts transverse to the incident plane (Imbert-Fedorov shifts) tend to be an order of magnitude smaller than the related Goos-Hänchen shifts in the longitudinal direction, which are largest close to critical incidence. We demonstrate that with the proper initial polarization the transverse displacements can be equally large, which we confirm experimentally near Brewster incidence. In contrast to the established understanding, these polarizations are elliptical and angle dependent. We explain the magnitude of the Imbert-Fedorov shift by an analogous change of the symmetry properties for the reflection operators as compared to the Goos-Hänchen shift.

Future experiments will show if the concept of beam eigenpolarizations holds more surprises. 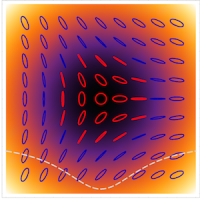 Together with John F Nye and John Hannay from Bristol we explored the reflection of so-called polarization singularities at optical interfaces. Similar to an optical phase vortex in twisted light, where the phase is undefined at its center, a polarization singularity describes a spatially varying polarization around a certain point, a C-point of pure circular polarization. In 3D, these singular points describe lines, C-lines. The picture shows the polarization ellipses around a C-point.

We find experimentally under total internal reflection extremely large shifts of the C-line of hundreds of micrometers, which is much larger than those observed for the centroid of the beam, which might find future applications in interface analysis or refractive-index (bio-) sensing.

Jointly with Nathaniel Hermosa (ICFO) and Andrea Aiello (MPL Erlangen), we demonstrate the relation between the phenomenon of optical beam shifts and the appearance of OAM sidebands under optical reflection. Both have their origin in diffractive corrections, but the precise connection was unclear before.

The influence of spatial coherence on optical phenomena is always very important for applications since one can possibly replace a laser (coherent) by a LED (incoherent)! For beam shifts, it was also experimentally not tested if coherence plays a role. We found that spatial beam shifts, which have successfully been tested in bio sensing, are not affected by the reduced spatial coherence. More information:

A beam with reduced spatial coherence also enables a curious experiment, it firstly allows us to see optical beam shift phenomena with the naked eye at a single standard air-glass interface! Below, two images are shown of the reflected field of a beam with reduced spatial coherence; for the two orthogonal linear polarizations (beam shifts depend strongly on polarization). Because of the granularity introduced by the speckle pattern, you can see that speckle on the left edge are more intense in the right picture than in the left. Therefore, the beam is shifted to the 'right' in the left picture. 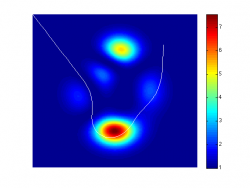 Graded index (GRIN) media have a spatially varying refractive index. In ray optics, the path of a light ray can easily be calculated as in this example: The ray is launched from the upper left corner towards the center. The scale on the right shows the local refractive index.

What happens to a realistic ray, a collimated light beam? We developed a material from a polymer-blend that has a graded refractive index profile, but perfectly stratified: the refractive index varies only with depth.