This work was done at Karlsruhe University (Kalt group). The single electron spin is a possible candidate for a qubit for future quantum information processing. The quantum mechanical state can be illustrated as a vector on the Bloch sphere (left picture): 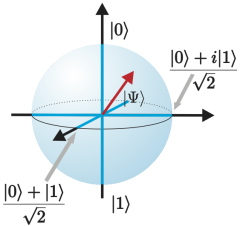 Experimentally, we confined the electron in a self-assembled InAs/GaAs quantum dot. Such a QD is a small (around 5 nm laterally and even less in height) inclusion of InAs in the host material GaAs. Electrons have a smaller potential energy in InAs than in GaAs, therefore they can get trapped in such a dot. The right picture above is a transmission-electron micrograph (around 20 nm width) of such a single quantum dot. The colors indicate the local indium concentration 1).

There is not only a single dot in a sample, therefore we used apertures in a gold film made by electron beam lithography to get optical access to a single quantum dot: 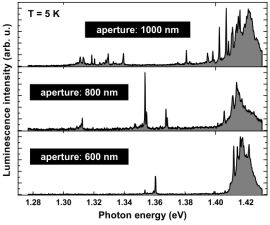 Then, the photo-luminescence spectrum shows single peaks. On the right, spectra are shown for different aperture sizes. On the low-energy side of the spectrum emission from a few single quantum dots is visible. The aperture size can be reduced until only emission from a single dot is observed. The luminescence at 1.42 eV is from the wetting layer, a quantum well where the dots are embedded.

The starting point for any classical or quantum computation is the preparation of a known state. In contrast to classical IP, where the average of many electrons is used, for QIP we have to prepare a single electron with high fidelity. Our approach was to use a spin aligner to first polarize the electron spin and then store it in a quantum dot. This was done in a special magnetic semiconductor, ZnMnSe. The electronic Zeeman splitting therein is hundred times larger than normally, which makes efficient spin polarization possible.

This is a scheme of such a device, actually these are real TEM images of the layers: 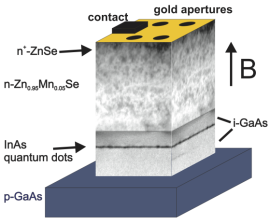 The electrons are polarized in the top layer and transported into the quantum dot layer. Through the gold apertures on top we observed the single photons emitted from the dots. If an external magnetic field is applied, the emitted photons have only one circular polarization, which tells us the electron was perfectly spin-polarized:

Most of this work was done in collaboration with Matthias Karl at Karlsruhe University (at the Kalt group). In optical micro-cavities light is confined to a very small volume which leads there to a strong interaction with matter.

One aspect we were interested in is to use such cavities to couple electrons in distant quantum dots via optical modes. For these matters, we investigated several different resonator types:

These resonators were produced via electron beam lithography with anisotropic etching steps. The pyramid is standing on a Bragg mirror.

In these cavities localized and coupled modes exist, hence allowing to tune the interaction between the two pillars on and off.