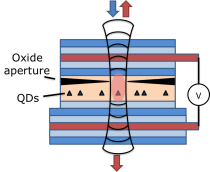 To make polarization-based photonic qubits interact with a quantum dot deterministically, the optical cavity modes must be polarization degenerate to yield the same field enhancement for both polarization components. We have developed such cavities with embedded quantum dots combining an oxide aperture (known from VCSELasers) with surface defects made with a laser. This leads to routinely <10% polarization splitting of the cavity modes. The devices are made in collaboration with Larry Coldren and John Bowers from the UC Santa Barbara.

Light consists of single photons, and the most classical type of light, coherent laser light, actually consists of a large mix of so-called photon number states - packets containing a certain number of photons. This fact makes it very hard to transform laser light into single photons, which are an important resource for photonic quantum information from quantum key distribution to quantum computing. In this paper published in PRL, we demonstrate that we can turn it around: based on such a high-quality source of single photons, and quantum interference in an optical setup, we are able to engineer artificial states of light that are very similar to coherent laser light, literally, we are making classical light “from scratch”! There are subtle differences between textbook coherent states and our artificial coherent states, for instance, our artificial light contains some quantum entanglement between photons at different times, in fact it contains so-called photonic cluster states that are also very useful for quantum information, see QLUSTER. In the picture we compare the Wigner functions where quantum entanglement shows up as negative values (the white curves indicate a value of zero). Apart from that, we see that the overlap with perfect coherent states is pretty good!

All light that we see consists of photons, however, single photons itself show fascinating different properties that enable, for instance, 100% secure communications in quantum cryptography or superresolution in microscopy. But making single photons is not an easy task. In one approach, the “photon blockade” effect, a conventional laser beam is sent to an optical cavity with a single atom (or an artificial atom aka quantum dot). Quantum effects in this device make it possible that only one photon at a time exits the device, like a turnstile for single photons. This device, however, requires very special properties and is extremely hard to fabricate. Now, we have confirmed for the first time experimentally that this can be done much easier: by using the “unconventional photon blockade” effect. This was theoretically conceived by our co-authors Vincenzo Savona and Hugo Flayac from the EPFL Lausanne. In short, we exploit the polarization property of the photons, and by cleverly using quantum interference of different polarizations, we obtain the same as in the photon blockade: a nice stream of single photons. The “unconventional photon blockade” might be very useful for future single photon sources and gives insight in the exciting photon number dependent physics of such devices. Editors suggestion: A Double Take on Unconventional Photon Blockade", Article: Phys. Rev. Lett. 121, 043601 (2018), pre-print Arxiv:1803.10992.

Cyril Vaneph and colleagues at the University of Paris-Sud have at the same time demonstrated the effect in the microwave regime.

An ordered stream of single photons is fundamentally different from conventional light which contains bunches of a random number of photons. Sources of such single-photon light are essential for emerging quantum technologies such as quantum cryptography or computing, but widespread use of recently developed bright semiconductor quantum-dot based single-photon sources was hindered by the need for complex optical setups. Here we show a fiber-integrated source of high-quality single photons; integration with conventional optical fiber technology will enable broad use in quantum photonics but it also might enable a number of new fundamental studies in various fields from microscopy to quantum metrology by reducing the experimental complexity significantly. Phys. Rev. Applied (Letter) 9, 031002 (2018).

Single photon non linearities are essential for quantum information and quantum communication applications. It has up to now been assumed that the technically very challenging condition of strong coupling between an cavity mode and a two-level quantum system is needed to obtain such strong single photon nonlinearities. Here we show that the lifetime-reduced fidelity of a semiconductor quantum dot–cavity single photon nonlinearity can be restored by polarization pre- and postselection. This is realized with a polarization degenerate microcavity in the weak coupling regime, where an output polarizer enables quantum interference of the two orthogonally polarized transmission amplitudes. This allows us to transform incident coherent light into a stream of strongly correlated photons with a second-order correlation function g2(0) up to 40, larger than previous experimental results even in the strong-coupling regime and beyond that what has been reached with atom optics. 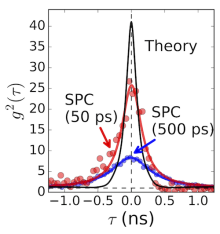 The second-order correlation function g2(t) corresponds to the probability to detect two photons separated by time t. If it is zero at zero time delay (t=0), g2(0)=0, never two photons are detected simultaneously: This light is produced with single-photon source, the photons are "anti-bunched". Conventional laser light has g2(t)=1, which corresponds to maximally random, “Poissonian” photon distribution. The highest photon correlations that appear naturally are those of thermal light with g2(0)=2, where the photons are “bunched” together. This is related to the Hong Ou Mandel and Hanbury Brown Twiss effects.

We show here the conversion of coherent laser light into light where the photons are strongly correlated with g2(0)>=40 ! 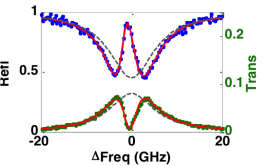 The key signature of such a cavity-QD system is that a single quantum dot can change the on-resonance transmission from transparent to fully reflecting. This means that a single photon is either reflected or transmitted depending on the internal state of the quantum dot, which in turn can be manipulated with a previous single photon. The consequence is a single-photon nonlinearity with potentially very high fidelity, which can apart from quantum information applications be used to entangle a large number of photons sequentially.